*This article is based on the interview conducted in June 2013; some details may differ at present.

An Open, Flexible Office Concept That Creates a Sense of Unity

It has been almost two years since GREE, Inc., a company that continues to enjoy rapid growth, relocated to Roppongi Hills. Since its founding, the company has moved repeatedly, but always within the Roppongi area. Following the opening of its first U.S. subsidiary in January 2011, it has continued to establish bases in various countries worldwide and plans to push ahead with further global development going forward. We spoke to this leading SNS company about its devotion to its office concept. 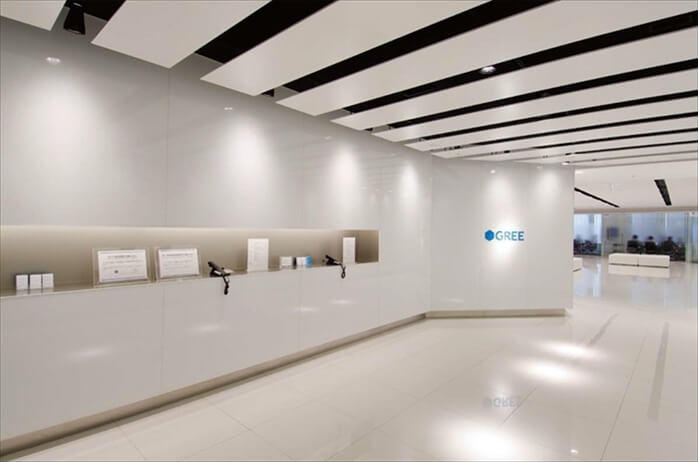 Following the launch of the GREE social networking service in February 2004, GREE, Inc. was established in December of the same year for the purpose of operating GREE.

Since then, it has grown its lineup of services, and today, having established itself in Japan and the U.S., it is moving forward with the creation of bases in various other countries, such as the U.K., Singapore, South Korea, China, and the Netherlands. In terms of scale, it has achieved rapid growth in just eight years since its founding, surpassing 30 million users in Japan and now expanding globally.

At the time of its founding in 2004, GREE, Inc. started out in an office of just 10 tsubo (approx. 33㎡/356ft²) or so. Subsequently, as its business has expanded and the number of employees increased along with it, it has continued to move offices within fairly short spans of time. GREE's rapid growth is immediately apparent when you look at its corporate history, which we have extracted from the company's website below.

All the company's moves have been between locations within the Roppongi area. For the latest relocation, besides the fact that the existing space was becoming too small due to the growing number of employees, other reasons for moving included strengthening the brand image for recruitment purposes and a greater need for security. Prior to the relocation, the office was 400 tsubo (approx. 1,320㎡/14,230ft²) in size; afterward, it had more than doubled to 1,050 tsubo (approx. 3,470㎡/37,400ft²). Two years have passed since the move to Roppongi Hills, and the company continues to enlarge its interior floor space due to the growth of its business and concomitant increase in employees. While GREE occupied one floor right after the relocation, it now uses around 3.4 floors. With a total of about 4,500 tsubo (approx. 14,880㎡/160,125ft²), the floor space is now over ten times larger than what it was before the move.

Why is GREE so devoted to Roppongi?

"It's because CEO Tanaka feels strongly about Roppongi. Since the time of the company's founding, IT companies have been clustered from Shibuya to Roppongi. And he was convinced that it was Roppongi that would become the center for IT business."

Some employees have made their homes in the Roppongi vicinity and commute to the office by bicycle or on foot, in part thanks to allowances for local residents offered by the company as a benefit. Consideration for these employees is another reason GREE has remained in Roppongi.

Next, we asked about the reason for selecting Roppongi Hills Mori Tower.

"From the outset, we were searching for a large one-floor office, and we initially considered a building other than Roppongi Hills. Then, when we consulted with Sanko Estate, the office brokerage firm we have dealt with since we began operations, about the vacancy situation, they provided us with information about not only that building but also lots of other office buildings in the Roppongi area where we would be able to obtain ample floor space. That included information about Roppongi Hills. Sanko Estate adjusted their schedule so that we could visit all the buildings and swiftly made arrangements. Ultimately, given the size of a single floor, the convenient access to the station, the security, and the fact that it's a landmark of the area, we moved forward right away with verifying the lease conditions and so on for Roppongi Hills."

The company was also glad that it had chosen Roppongi Hills after the Great East Japan Earthquake struck since it was able to conduct business as normal even during blackouts thanks to the building's private generator.

What's more, the building's visibility has made a significant contribution when it comes to recruiting--along with the company's own reputation, of course. As a result of the move, GREE has been able to attract a lot of top-quality personnel.

"We continue to be very satisfied with the Mori Building, which has allowed us to flexibly adapt to the rapid increase in personnel by expanding our floor space and so forth."

The simple office layout, designed first and foremost to provide a sense of unity, represents the open culture that has been part of the company since the very beginning.

Looking at GREE's office, it's an efficient workspace based on universal design, with no special features built into the physical structure. This very simplicity makes it seem fresh and appealing in today's business world.

The concept of an office layout that provides a sense of unity is something that has not changed since the company was founded. Indeed, it's one of GREE's management principles.

"Other companies have a more clearly defined hierarchy, and in many cases, different desks and chairs are provided along with offices for executives. But at GREE, all the employees interact on an equal footing, so executives normally do their work sitting alongside other employees in the work area. The result is that this has encouraged the creation of a free, open corporate culture with a strong sense of unity. Another benefit of a simple office is that when there are sudden organizational changes or employees move to another department, the changes can be made smoothly with minimal renovation costs."

This doesn't mean, however, that no steps are taken to facilitate communication within the office. GREE, needless to say, understands how important that is.

"There's a break room on the floor, which is an area where employees can communicate freely. At lunchtime, lunch boxes are sold there, and we believe that this leads to more active communication between colleagues. Beds and massage chairs for relaxation have been placed in one corner of the room, with no restrictions on when they can be used. On Friday evenings, we also hold a dinner for employees known internally as the 'Friday party'."

"The break room has a simple but elegant layout that can easily be adapted to handle growth in employee numbers. There are about 300 chairs available for using it as a communication space. The materials were also selected with care: we went with the designers and contractor to look at flooring and the like."

What's more, there are three seminar rooms with enough space to accommodate over 300 people each.

"In the past, one seminar room was enough, but as the number of employees increased we no longer had enough space, so now we have three rooms in the office. We also take off the removable sliding walls dividing the three rooms to hold our general staff meetings every Monday and monthly meetings at the end of each month. It's possible for people at branches other than Tokyo to see and hear what's happening at these meetings by attending remotely via computer network."

"Having about 1,200 people gather in one room every week has a really strong impact in terms of giving employees a sense of togetherness as they do their work."

"In addition, we have set up a space near the development team where we hold training for engineers, called the GREE Boot Camp. It's a place that the leader and other team members can use for training new employees whenever they like. The desks and chairs differ from those in the rest of the office."

Some other distinctive aspects of the office are described below.

The visitors' entrance has a glassed-in design, with a white color scheme, creating a sophisticated overall look. A giant monitor (GREE Vision) is installed in the front, which has the following effects:

"The ambience of the entrance and the transparent use of color seem to be greatly appreciated by visitors. We've received feedback saying that it makes an impression on them or that it expresses the company's character. Employees have also said the same."

The various meeting rooms where visitors are hosted are named after places in Silicon Valley that made a strong impression on CEO Tanaka during his college days.

A distinctive feature of GREE is that none of its offices, from past to present, have had walls within the work area. The layout is simple, open, and flexible, creating a sense of unity. The company is devoted to this office concept, which has been important ever since it was founded.

What's more, there are free spaces with hexagonal tables set up within the work area which employees can use for small, informal discussions. Since there's no need to reserve these spaces in order to use them, they help make it possible for work to proceed smoothly.

The open work area with no partitions

Its relocation may be complete, but GREE is still gathering office information...

Two years have passed since the relocation was completed. Although GREE is currently accommodating employee growth by expanding its floor space within the building, it's always gathering more information about the surrounding office market and vacancies.

"Relocating our office goes hand in hand with the evolution of our operations, and we believe we always have to be prepared to adapt to sudden changes in the business environment or market conditions. That's why, even now, though the relocation is complete, we continue to ask Sanko Estate to share information with us regularly. It's good to have a large amount of information and timely access to details about the latest buildings before they go on the market. We deal with several sales representatives of Sanko Estate, and all of them are quick to meet our needs and provide precise answers when we ask them questions or consult them. It gives you peace of mind to know that a company like that is there for you." 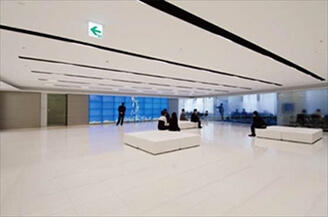 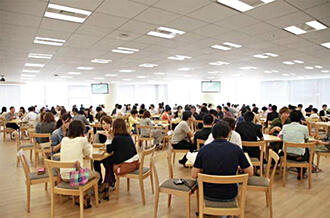 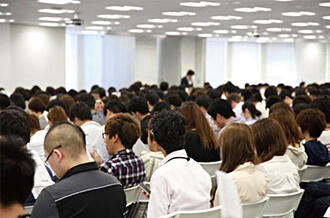 The scene during a general staff meeting 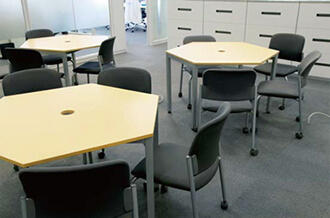