*This article is based on the interview conducted in August 2019; some details may differ at present.

With a history of 166 years and the top market share, WMF has led the industry of commercial coffee machine manufacturing, development, and sale. In 2019, it integrated its management with a French company and changed its name to SEB Professional Co., Ltd. This process included relocating the head office and building an office designed to improve operational efficiency. In this interview, we asked about the concept of the office and its new functions. https://www.wmf.com/de/ 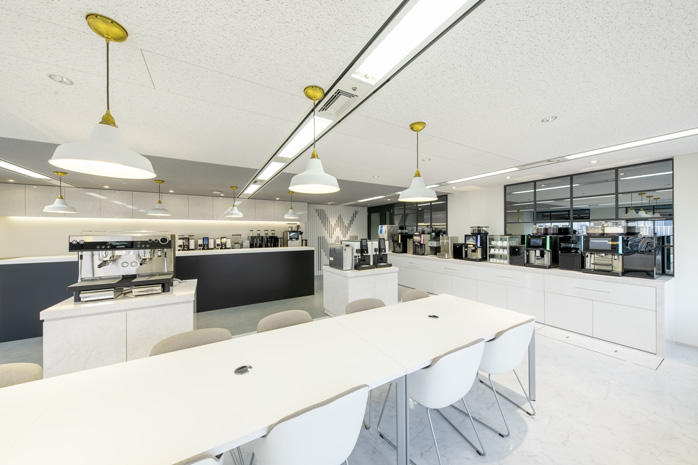 In 1853, a metalworking company called Metallwarenfabrik Straub & Schweizer was founded in Geislingen in southwestern Germany. In 1880, it was newly established as Wurttembergische Metallwarenfabrik (WMF). During World War II, the head office building was built with an investment worth nearly 100 million yen at the time, and through efficient management, it has helped the German economy develop. The head office building still stands as a historical landmark.

In the 1920s and 30s, WMF began manufacturing and developing coffee machines. The first coffee machines were not button-operated, but rather large machines with valves operated one by one using steam and pressure. Sales restarted in the United States in 1945 and spread to other countries. Sales in Japan began about 40 years ago when few competitors were offering commercial coffee machines.

After coming through the global financial crisis, selling coffee at convenience stores, mainstays in everyday life, began to boom in 2012. The spread of reasonably-priced coffee drove up demand for coffee machines. Now, the company offers an even richer menu.

"I think functionality, operability, and compactness are the main factors behind the spread of coffee machines," says President Tachi. "If you want to enjoy coffee, the taste of regular drip coffee is fine, but if you want a latte, the true flavor comes from combining coffee concentrated like espresso with steamed milk. It is with that in mind that we work to develop machines that produce good flavor every day."

As the menu of coffee machines on offer expands, restaurant adoption will also spread to ever more diverse establishments. Right now, demand from Japanese restaurants such as sushi shops is also on the rise.

Before moving, the company occupied an office building in Nishi-Shinbashi, Minato-ku, but was considering relocating due to the deterioration of facilities as the building aged. In December 2016, amid consideration, it integrated its management with a French company, Groupe SEB, which owns cooking utensil brands such as T-fal. This added momentum to the relocation plan.

"With our corporate branding getting an overhaul, we needed to redesign the concept of our office and showroom. It was time to reset everything," says Tachi.

There was also a mission to solve management issues. One of these was security.

"Our previous office was small, so where we met with visitors was inside our working area," reflects Tachi. "That meant that every time we had a meeting, the visitors entered our working area. That area contained unreleased information, making it a vulnerability in terms of security, which was something we had to improve."

Another issue was related to expanding the business. According to Tsutsui, "The previous office only had a showroom for one of our brands, WMF. In the future, however, we have to focus as much on our other brand, Schaerer. Therefore, we needed to prepare a dedicated showroom."

Creating a showroom for each brand required a larger area than the previous office. So, in October 2018, SEB Professional asked Sanko Estate, one with whom has a long relationship, if it could find a new location.

Tachi says, "Building new showrooms in the new office was a major goal of the move. However, it seemed impossible to do additional plumbing work in regular office buildings, and we struggled to get the approval of the building owner. We asked Sanko Estate to expand the search area and carefully look for a property."

It was then that they found a property that matched the conditions for size, rent, transportation access, plumbing, and more - an office building located in Tsukiji, Chuo Ward, completed in 2002, that required earthquake reinforcement. It was a perfect destination for the company.

A relocation project team made up of members from each department

After agreeing on occupancy terms with the building owner, the company signed a lease agreement. A schedule was formed to start interior design at the end of February 2019. Sanko Estate's PM team was appointed to take charge of every aspect of moving the office (supporting interior design, construction and relocation as well as managing costs and the schedule).

"It was a tight schedule, so I wanted to reduce our workload by outsourcing management of the entire project," says Tachi. "Several interior design companies competed for the job, and we were able to select the company whose proposal best matched our ideas."

"We'd just completed our corporate design manual, so we had them make a matching design proposal. By referencing that material, we were able to move forward," adds Tsutsui.

A project team was also formed from within the company. Because each department had completely different needs, members with different perspectives were chosen one by one from each department to exchange opinions on an equal footing. President Tachi says he made an effort to maintain distance from the project team.

He says, "If I got involved, I might have influenced everything down to the smallest detail. But since the office is for employees, I strongly felt that they should think about it for themselves."

Employees were surveyed to clarify desires regarding the relocation. The responses were aggregated, analyzed, and reflected in the office design. The team endeavored to make decisions as much as possible in the meetings, complete tasks one by one, and make smooth progress.

"We took in as many requests as possible and then scrutinized them based on importance and cost. There were several ideas that we had to pass on this time. We also replaced with ready-made furniture some parts we originally planned to make," says Tsutsui.

The new office was completed at the end of April. As scheduled, the company moved in over a long weekend and officially opened for business on the first day back, May 10, 2019.

It was decided that the concept for the new office would be "a bright, modern office that encourages communication." So, how does the new office embody that concept?

The spacious entrance bears the logo of the new company name, SEB Professional. Monitors are set up to convey the values of the corporate brand. The sofas in the waiting area create a chic atmosphere. According to the company, the entrance design was chosen from about ten patterns by discussion among project members.

The first room on the gentle slope up from the entrance is the showroom for Swiss coffee maker Schaerer. Composed of a wood-grained interior, it can also serve as a place for internal meetings. Of course, it can accommodate meetings with visitors as well as internal meetings. The room beyond that is the showroom for German coffee maker WMF. Brightly designed in white, it has a larger area than Schaerer. With windows on two sides, the company says that the view often becomes a conversation topic during sales.

"The sink is bigger than in the previous office, making it easier to wash. Also, storage spaces under the machines make organization easy. It always feels clean, so even if a customer drops in unexpectedly, we can respond without panicking," says Tsutsui.

Based on the experience of the previous office, a new, closed meeting room with eight seats was set up next to the entrance.

"In the previous office, we were often unable to handle sudden visits by customers and even had to meet in nearby coffee shops. In some cases, this inconvenienced the customer. In the new office, we added a room that can be used for outside visitors," says Maeda.

Inside the office, relaxation space is partitioned from the working space with shelves to give the area a sense of openness and brightness. The open relaxation space has tables and a break area. It can also be used for small meetings, greatly improving operational efficiency. Other areas are properly divided into working areas, internal meeting rooms, external meeting rooms, and showrooms. Furthermore, the design keeps flow lines away from customers, significantly improving information security.

Within the working area, the engineering room - the company's core - is also improved as a new installation of a partition between the workshop and training room.

"Machine testing prior to the introduction can now be kept confidential. The engineering room is an important place for the maintenance of actual machines, so our priority was to improve maintenance work. I think we were able to create the best environment by improving minute details such as the height of power supply," says Tsutsui.

"Various sales-related opinions emerged in the process, and Sanko Estate not only aggregated those opinions but added something more in their proposal. Of course, they also considered cost in their advice and help in fixture selection," says Maeda. 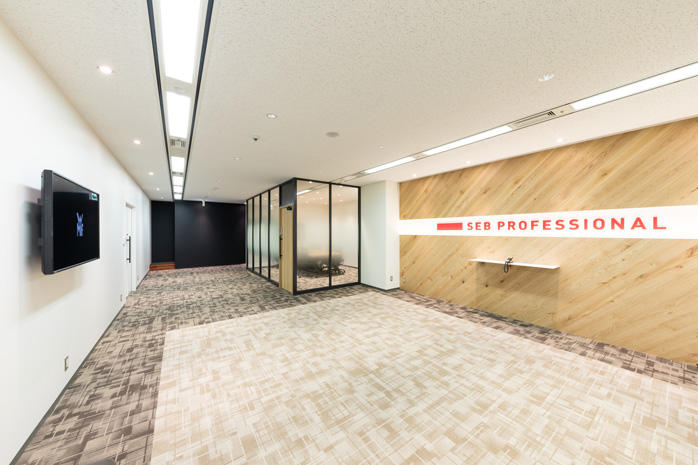 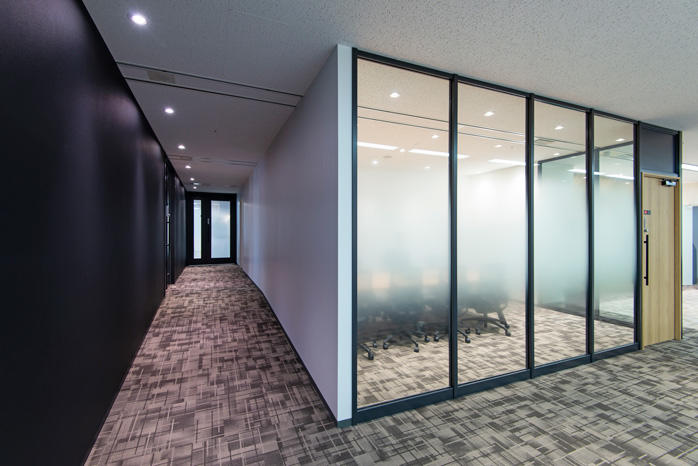 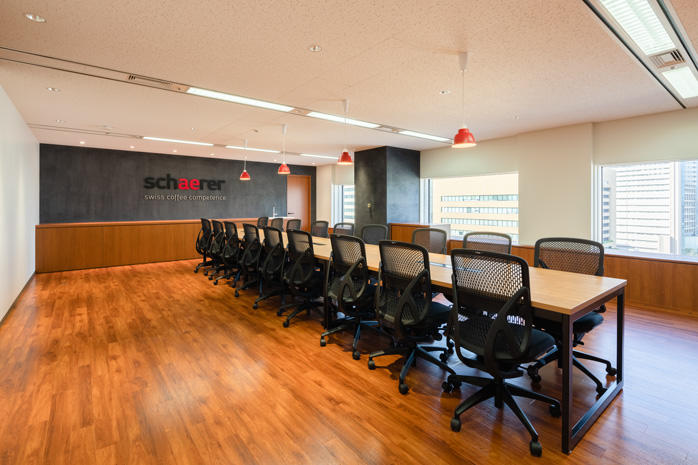 The company reports that this relocation project has had a significant effect on the number of visitors.

"I think it has had a strong impact on customers. Increasing the showrooms has made it easier to arrange reservations. In the past, we sometimes had to cancel because we failed to arrange meeting schedules. The new office has increased sales opportunities," says Maeda.

"Visitors have praised the product arrangement, saying that it's very easy to understand. The new showrooms are becoming a tool for sales staff to attract customers actively," adds Tachi.

The company plans to continue basing future office management on actively responding to employee desires. For SEB Professional, the process of office creation has just begun. It will continue to create modern offices that encourage employee communication.